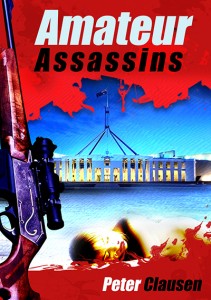 About the project
We converted this book from a customer supplied word document manuscript to standard reflowing epub and mobi format. This package also included cover design where we combined three different images to form the final design. We then distributed the ebook files to all major vendors once it was approved by the customer.

About the book
This is a work of fiction, but the Gun Law Legislation enacted by ex-Prime Minister John Howard in 1996 after the Martin Bryant massacre in Tasmania is fact. This book relates to a backlash against the federal government by disaffected gun owners, where assassinations of Cabinet Ministers is planned and carried out convincingly by a group of amateurs.

Understandably, many people in country areas who had been brought up with guns all of their lives, felt outrage at being treated like potential killers just waiting to go berserk.

Other gun owners of a somewhat sinister nature, were already living on the edge of sanity with their emotions barely controlled but were forced to face the fact that they had now become criminals since they refused to give up their firearms. One or two had already succumbed to their dark side.

One in particular of those among the group of potential assassins who came together, unbeknown to the others, was an undiagnosed psychopathic depraved sex predator of young women who he hated with a passion, then used and mutilated after he had taken satisfaction.

This then, is a product of fiction stemming from an act of Parliament. I submit that it would lie within the realm of possibility for some of these disturbed people who feel that they have nothing to lose who walk among us every day, to come together given the right circumstances. The right circumstances came about and then it began.