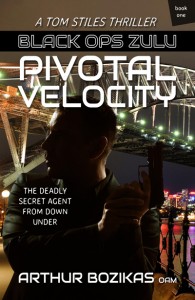 About the project
Originally Arthur came to us for an edit, which we completed towards the end of 2014. Once that edit was completed and approved by Arthur, we moved on to creating an ebook. Using supplied imagery we created a cover that matched the tone and setting of the novel. This cover design inspired our Ebook Designer’s Touch™. The ebook came together very quickly, and we loaded it on all of our vendors.

Later down the track we designed some marketing materials for Arthur, for him to use at the 2015 Book Expo Australia (these can be seen below).

Stiles is a conflicted character who measures materialism against ethics and desire versus love. His progression from suburban family man to government paid assassin is a brutal tale of emotional disintegration. The Tom Stiles thrillers are action packed character explorations of a man who is part philosopher, part killing machine.

The first in a series of thrillers starring Tom Stiles follows his journey from family man and fraud investigator to elite Black Ops secret agent.

The deaths of his parents and brother in a house fire when he was a child and, more recently, the death of his wife, have left Tom craving distraction in the form of an adrenalin rush.

“Black Ops Zulu: Pivotal Velocity” begins with a car crash and the death of Tom’s latest lover, Natasha Mikula, daughter of Vlad – a member of the Chechen mafia.

As Tom struggles to hide his affairs from his current partner, Victoria, Vlad demands a dangerous favour that gets Tom in too deep with Cerberus, a criminal mastermind with links to international terrorism. When the Prime Minister of Australia appoints him as Chair of a new International Fraud Taskforce, Tom is left wondering if there’s more to all this than it first seems.

Tom’s fight to uncover these mysteries while holding onto his family and his secrets, culminates in a battle of epic proportions, played out in the suburban streets of Vaucluse, Sydney. 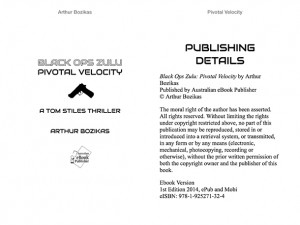 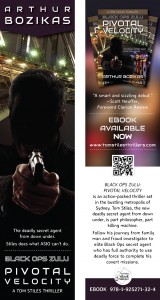