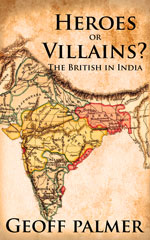 This Ebook is no longer available.

One of our Creative Consultants designed this attractive cover as per the client's specifications, and converted the book to ePub and mobi. We also distributed it for him.

“Heroes or Villains?” is focused on the events and power plays of the politicians and administrators in India and England concerning the corruption scandals involving the Governor General of India and the British Residency at Hyderabad in 1822-1824.

Research for the book was concentrated on contemporary documents and writings. These documents and letters, penned at the time, often reveal personal details of the people – what they actually said or wrote, and what they believed, and how they acted.
The alleged favoritism to the banking house of William Palmer & Co by the Governor General of India and the subsequent enquiry in London in 1825 brought about the censure of the Governor General and the sacking or demotion of several East India Company officers.

The book also reveals some personal background details of politicians and events of the time. It tells of two British cabinet ministers who fought a pistol duel at dawn. It also tells of the events in 1833 in the East India Co that caused both the Chairman and the Deputy Chairman to resign mid term and brought about a power struggle between the Parliamentary Board of Control and the East India Company Directors which resulted in legal action in the Kings Bench Court.