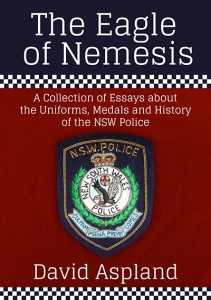 Ebook available on:
This book is no longer available.

David came to us with a word document manuscript of a collection of essays and images. We designed a front cover using client supplied images before converting the whole manuscript into an ebook. We then loaded the epub and mobi files to the usual vendors. David was a pleasure to work with and wish him the best of luck.

The original compilation of these essays was done in 2012 as a small commemoration for the 150th Anniversary of the New South Police Force. The essays and articles contained in this revised volume have been written by me over the past 12 years looking at various aspects of the history of the New South Wales Police. The aim of these articles was to record my memories of events and items that impacted on my 25 years of service between 1980 and 2005. Also I wish to create a historical reference for those interested in collecting or research NSW Police history or memorabilia.

This volume does not purport to be a complete history but rather looks at specific aspects of uniforms, equipment, medals and traditions, along with some individuals. The aim here was to get into print the details that now seem to being lost. It also considers some of the social aspects of the policing e.g. the role of women in policing in New South Wales between 1915 and now, as well as the now forgotten Native Police Corps of the New South Wales that operated in the Port Phillip and Northern Districts of New South Wales between 1837 and 1859 when these two areas became Victoria and Queensland respectively.

Some of these articles will appear similar but were written for specific purposes with new and differing information in each or new perspectives. Some will be a subject of ongoing research e.g. the bravery awards made to members of the NSW Police as the current public records of these individuals appear to be scant.