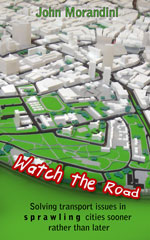 As it is a lengthy book with hundreds of headings and dozens of graphs and tables, the project took approximately four months from start to finish.

We redesigned most of the images and graphs, which were set-up in Word. We used Adobe Illustrator and/or Photoshop to redesign and optimise the images for ebook formats ePub and Mobi, testing on iPad3 and Kindle1. We used Adobe InDesign to set up the ebook layout with paragraph styles and page breaks, hyperlinks, table of contents and everything desired in the ebook. John Morandini was a very easy author to work with and has a sound marketing plan to help sell his new book.

A new eBook titled “Watch the Road: Solving Transport Issues in Sprawling Cities, Sooner Rather than Later”, explores the causes of and solutions to worsening traffic congestion and deficient public transport in urban areas around the world.

Although much is already said about such issues, this title stands out because it proposes arrangements which are affordable and feasible. In particular, it focuses on subtle changes that can be made to the role of roads as the antidote for the issues, and articulates achievable and timely alternatives to current plans, policies and actions, so prone to delivering too little too late, year after year.

See www.transportstrategies.info, a complementary website we set up for him, for more information.