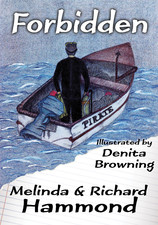 Australian eBook Publisher typeset Forbidden for print, using images supplied by the client, and converted it to epub and mobi. We then distributed the ebook on the major vendors, shown above

When Gilly McMahon watches her older brother, Cracker, and his friends, Trann and Bone, disappear over the cliff in front of their family’s holiday shack on a secret expedition she is determined that she will not be left behind.

Accompanied by her cousin Bobby she follows the boys around the rocks to Pretty Point where she discovers dozens of black onion-like bags filled with stinking black shells in Cracker’s secret cave.

Cracker is annoyed that Gilly has made such an exciting discovery it is his expedition after all.