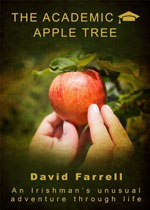 About the project
This ebook was converted from Word document to standard ePub and Mobi. We designed the cover using a stock image we purchased and then embedded the image into the ebook once approved by the client. Once the book conversion was complete, we then distributed it on Apple, Kobo, Amazon and Google. The client upgraded his package to include 2 x half hour Skype consultations for brainstorming, planning the strategy and training for marketing his ebook.

About the book
This autobiography takes the reader through a life of growing up in rural Ireland in the 1930s; losing the family farm, immigrating to Canada, working in various jobs from making donuts to working as a cook in a logging camp, travelling to Australia as greaser No.2 in the engine room of the MV King Malcolm; working as a station hand in the Flinders then returning to Canada.

At 27 I went to the University of British Columbia then on to the University of New England where at 36, I was appointed a temporary lecturer, and later to a personal chair in 1992. I describe the incidences at that University. First the upheaval in the Faculty of Rural Science, then the torrid times when in the late 1980s there were some unfortunate appointments leading to the forced amalgamation with other institutions, the de-amalgamation and the politics and gross mismanagement that went with these events.

My journeys to numerous third world countries, such as Afghanistan, Myanmar, China, South Africa and many more were to work on foreign aid projects or indulge in research. My personal family life was not always a happy one. I spent over two interesting years in Indonesia. This gave me an insight into what really happens in foreign aid development. The final chapter describes how our patented Heart Smart egg was hatched then shot down by the ACCC only to rise out of the ashes but besieged by unscrupulous businessmen until it finally returned to the market. This makes a fitting end to an unusual life.