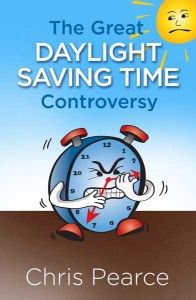 About the project
We first did the illustration for the cover and then when the customer was happy with it, we did the cover design.  We also did the ebook conversion and aggregated it on three of our usual vendors.

Daylight saving time has been described as one of the most controversial issues in modern history. This encyclopedia of daylight saving time commemorates 100 years of the scheme since it was first introduced nationally in 1916 by European countries on both sides of World War I to save fuel.

It features many intriguing and often prolonged battles between advocates and critics of daylight saving in countries around the world, as well as lighter moments. It highlights the determination of daylight saving time champions such as the UK’s William Willett, the US’s Robert Garland and Harley Staggers, New Zealand’s Thomas Sidey and Tasmania’s John Steer. It delves into the chaotic daylight saving situations that emerged, notably in the US and Canada, but also elsewhere. Every country and sometimes each state has a different and usually controversial story to tell.