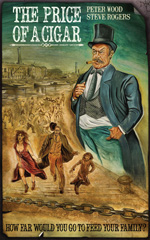 About the project
This ebook was converted from Word to ePub and Mobi by our team and published by Australian eBook Publisher. Steve was great to work with, and the entire project went quite smoothly from start to finish.

Ebook no longer available for sale

About the book
In London, England in 1889, twenty impoverished dock labourers driven to the edge of despair by their living and working conditions, began a dispute which almost brought down the British government, the most powerful administration the world has ever known.

Viewed through the eyes of James Donnelly, a young, but wealthy, Amercian journalist working in London for The Times, The Price Of A Cigar chronicles the story of these twenty dockers and their wives and children as they confront a seemingly hopeless struggle for survival – a struggle in which husbands perish in the dispute and wives are driven to prostitution with horrific results.

Introduced to the daily plight of the families by Annie, the young tavern worker and combative sister of the strike leader, James Donnelly initially reports on the dreadful conditions in which the people live and exposes the political intrigue and greed of the wealthy employers that provoked the conflict. Married to Lady Charlotte Pemberton, heiress to the National British Bank, Donnelly’s reports create mounting friction within his marriage. Soon it collapses as he fails to recognize the protocols of the British upper-class and the price to be paid by those who fail to adhere to its rules.

Donnelly resigns from The Times and, alongside Annie, concentrates his endeavors in support of the dockers and their families. This unnatural alliance would lead not only to the extraordinary outcome of the strike involving millions of people around the world, but, for both, would transform their lives forever.

The Price Of A Cigar recreates this remarkable and historic struggle of a small band of men and women who refused to give in, sacrificing so much for an increase in pay to sixpence an hour – the price of just one cigar.