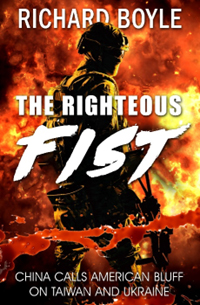 About the project
Richard Boyle first approached us about converting his book The Righteous Fist into an ebook in January 2022. We did the cover design following Richard’s design brief and converted it into an ebook. We then distributed it via our online distributors.

About the book
American society of the year 2039 is even more fragmented and broken than it is today. In fact it is so fragile that Chinese interventions around the world will eventually cost the US President his life.

The Chinese manage to expose flaws in the in US Defence treaties around the world. The Chinese develop new strategies and politics in nuclear weapons. This traps the US President and his General Staff, rendering them indecisive.

At the same time, the Russians seize on this discord to overrun the Pro-Russian south of the Ukraine, capturing large economic areas and the bulk of Ukraine’s fifteen nuclear reactors. The Chinese managed to break the hydro-lens at the main US Indian Ocean base, at Diego Garcia. This puts American and Indian forces in the Indian Ocean region at the mercy of the formidable Chinese Navy. American citizens start to question whether or not places like Taiwan and the Ukraine are worth fighting for. Americans are tired of being the world’s “police force” for every insignificant trouble spot.

The Chinese Army lands in the south of Taiwan, seizing the large city port of Kaohsiung. This the key to the invasion of Taiwan. Multitudes of Chinese troops are able to land and are out of range of the Taiwanese Army defending the capital, Taipei. The Chinese attack Australia in order to break the US military alliances with smaller Asia countries.

About the Author
Richard Boyle wrote The Righteous Fist during three months lockdown in and around the beautiful countryside that is Somerset. He would like to thank his educators, David Chandler, John Keegan, John Pimlott, at Dept of War Studies, Royal Military Academy, Sandhurst, and Hansjoachim Koch, German military historian, and WO2’s D. Ford and F. Hancock, both cool, reasoning minds under fire. 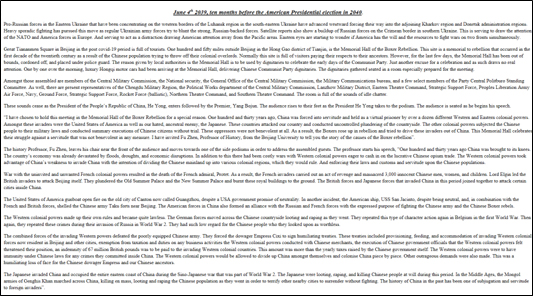