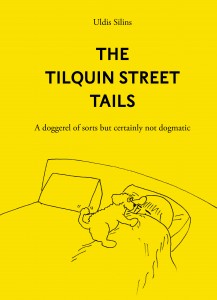 Uldis and his son Martins approached us with their manuscript and a series of pictures to be replaced in the ebook version of the book. They already had a cover prepared and were happy with the inside layout so all we did for them was the conversion to ePub and Mobi.

We then aggregated the book on to all the major vendors where it is now available for purchase.

About the book
This is a rather unusual yarn about two Australian dogs called Mookie and Gerty.

Mookie’s owner, referred to as Mum, lives in LA and for this reason the Maltese terrier has been turfed out to live with Mum's parents G-ma and G-pa. And then Gertrude, a Bichon Frise pup enters the Tilquin Street household by courtesy of G-pa’s credit card.

The subjects cover campaigns against the Bush turkeys, O’Malley, the neighbour's cat, she writes about global warming, her relations with Mookie, in fact, everything under the sun.

And now last but not least a word from Julie Anne Rhodes, cousin Oscar’s Mum. Beware! The Tilquin Street Tails have been known to cause chronic deep belly laughs, no matter what your age, or how many times you read it.