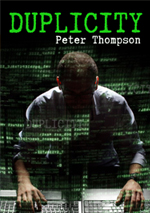 About the project
This project involved converting the customer supplied Word document into standard reflowing epub and mobi formats. We also did the cover design. Once the final drafts were approved, we then distributed the ebook to all major vendors.

About the book
An Australian commando officer, Harry Bell, barely escapes death from a roadside bomb in Iraq. He returns home and adapts his security and surveillance technology to fight a new battle against global criminal organisations operating in drugs trafficking and money-laundering scams.

A serial killer scientist leaves a trail of unexplained deaths throughout southern Australia.

Harry gathers a team of IT and ex-military associates to provide support services to federal law enforcement agencies to track and detain the killers. His system is hacked by an insider in the pay of the criminals. Subsequently the battle becomes intensely personal when a friend is abducted and a nephew is murdered.

Harry’s team plays a leading role in covert surveillance missions combined with his hi-tech tracking software application to establish a link between the drugs trafficking and money-laundering operations.