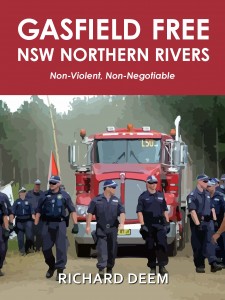 About the project
We designed Richard's ebook using our Ebook Designer's Touch™ and created a cover to match. We created a mobi and epub version of the book, but we also created an interactive PDF to make selling or transferring the title via email  easy. Once Richard approved our design we distributed it to Kindle Select (Kindle's exclusive program), after a ninety day period we then loaded the ebook to Apple, Google Play and Kobo.

About the book
When the New South Wales government finally offered gas exploration company Metgasco $25 million to give up its activities and aspirations in the Northern Rivers region, the people who had been involved in the 4-5 year struggle to get to this point began to look back on their achievement and say “somebody should write it all down.”

For most of us, fulfilment of the Company’s intentions would have been an intolerable insult to the essence of our homeland. A gasfield invasion would have come at the expense of the things that hold us together—clean air, clean water, beautiful scenery, productive agricultural land, cohesive communities, World Heritage listed pristine environments and much more.

Had we not fought for the integrity of the Northern Rivers region as those who went before us fought, we would be responsible for leaving a greatly diminished legacy for those who will come after us. There was no option but to fight.

This book describes how this battle was won. 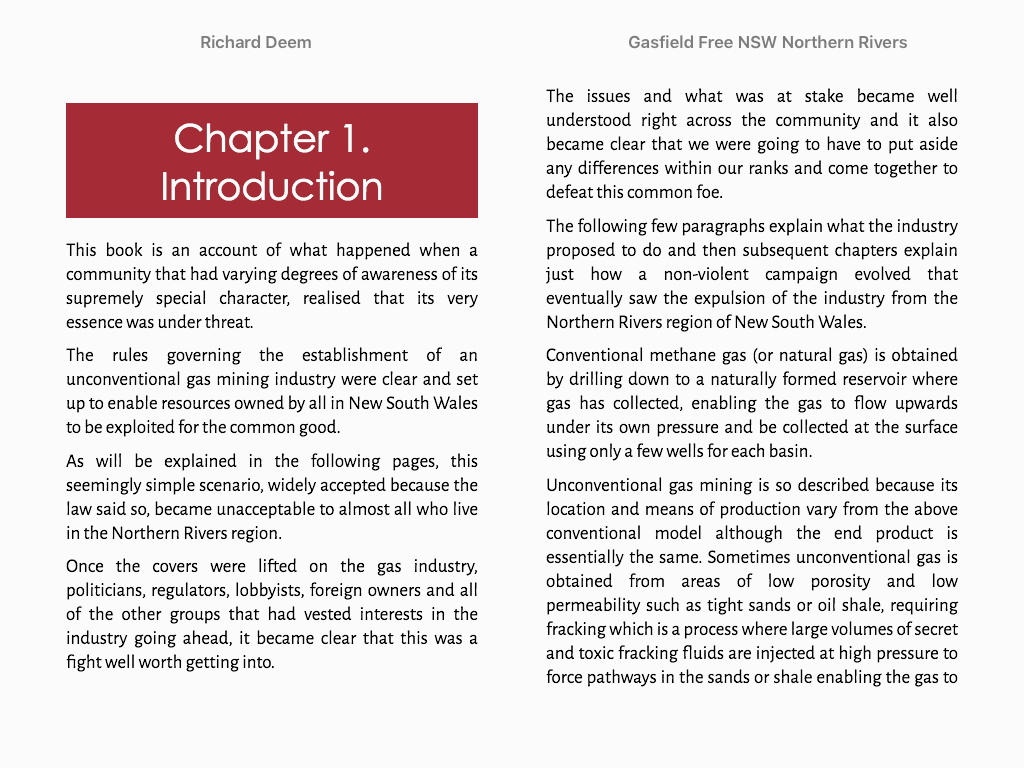 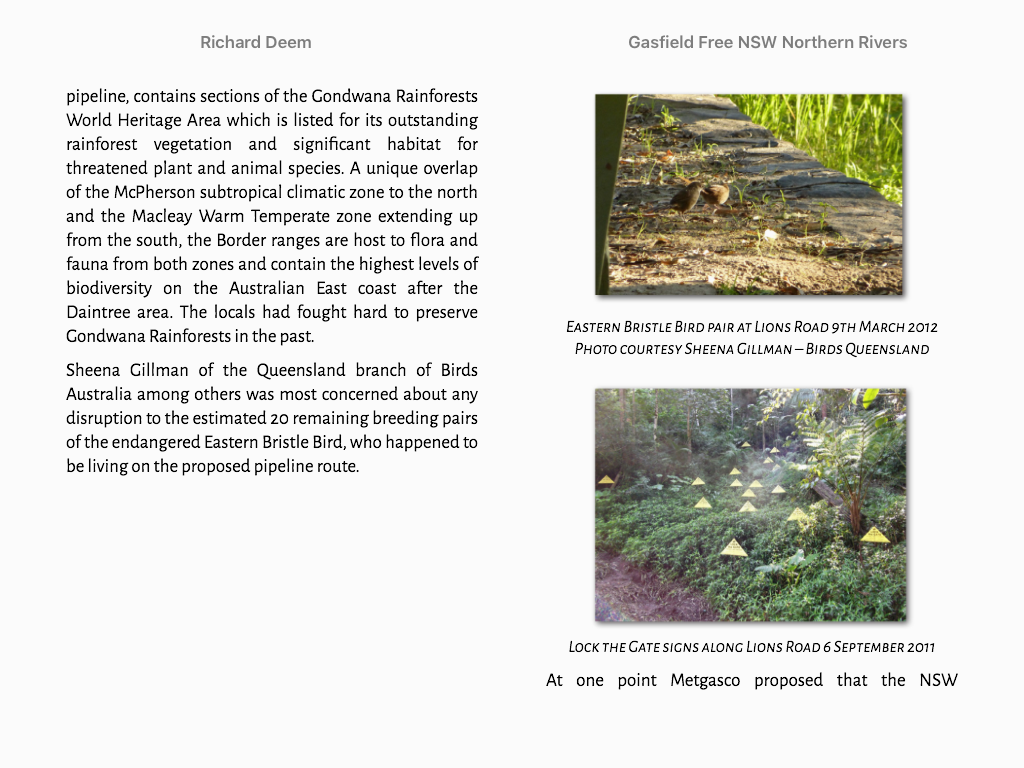 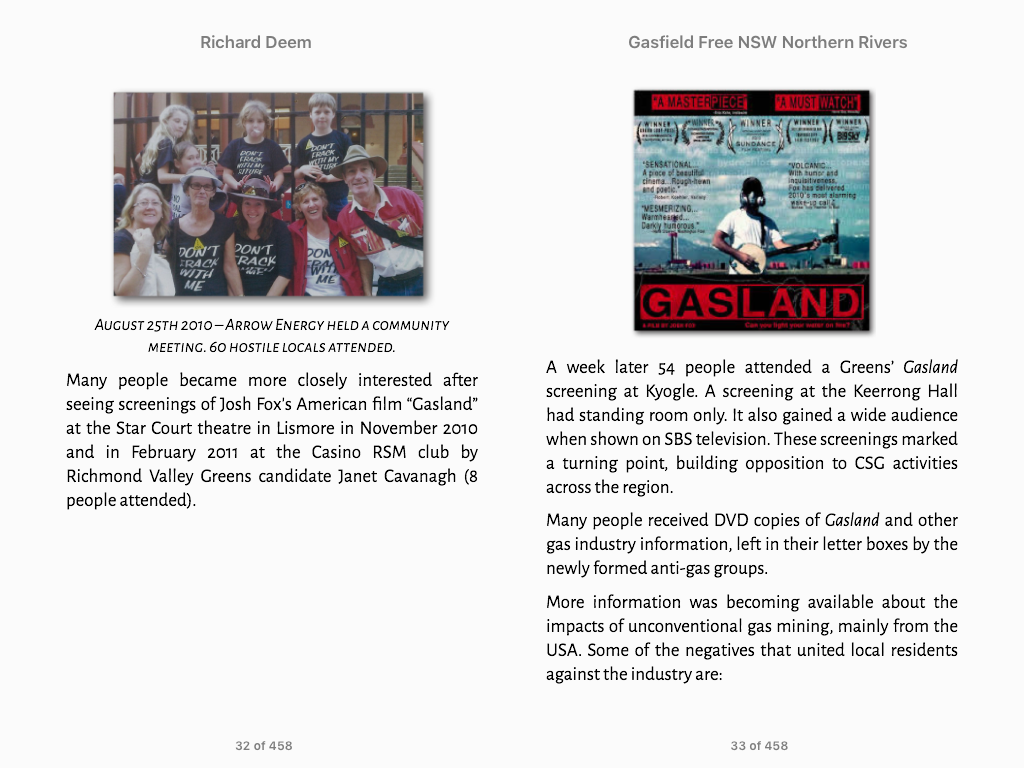 About the author
Richard has degrees in Economics and Statistics and in Law and diplomas in Education and Business and held management positions in economic research, market research and sales.

He spent many years teaching management and law subjects at both NSW and Queensland TAFE colleges and at the Alice Springs Community College.

Richard then went into practice as a solicitor in Sydney and finally in Coolangatta.

Richard and his wife Gwen then purchased a farm at Yerra to the west of Maryborough in Queensland, raising cattle and growing olives and lemons. They also built up a 200 hive apiary and finally retired to Maryborough.

Realising that they had retired too early, they sold their house and moved to Cougal on Gradys Creek just south of the NSW Border Ranges and began working on regenerating the native vegetation species along their creek frontage.

The implications of Metgasco’s Lions Way Pipeline plan and the establishment of a gas industry across the Northern Rivers soon became apparent and Richard and Gwen commenced their opposition at a meeting at the Kyogle Memorial Hall and then at the inaugural meeting of the Kyogle Group Against Gas.

The author sincerely regrets that it is not possible to mention so many gasfield free warriors who might eagerly be looking through these pages to see affirmation of their roles in the struggle and the sacrifices they have made.