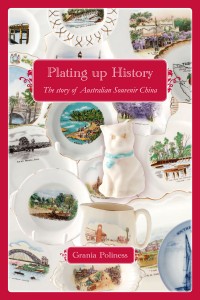 About the project
Grania already had a well laid out manuscript in the form of a PDF, that she wanted converted in to a reflowing epub and mobi as well as to be used for print on demand.

We converted the image intensive book to reflowing epub and mobi and after some conversion of the file formats and resolutions we were also able to put the file up for sale as a print on demand book.

About the book
This book is a unique approach to the history of Australia told through the images which have appeared on Australian souvenir china specifically commissioned by councils, businesses and individuals. It is the story of the images and their creators.

Many of the images commemorate not only important events, such the opening of the Sydney Harbour Bridge, but also the story of cities and towns and the events and people important to them: the building of a bridge or a dam; the unveiling of a war memorial; the naming of a town clock after the local doctor; or, a memorial to the early cane farmers and cutters. These are fascinating stories and in many ways represent the people's history.

The book also tells the story of the overseas china companies, from whom the china was commissioned, and the problems many of them faced through occupation and war. It also describes the work of the potter's printers and gives information on the china making process, the china marks used by the different companies and the dates of manufacture.

One of the joys of reading this book, is in discovering how the finished item, when it arrived in Australia, often differed from the original Australian image because of the lack of knowledge on the part of overseas based potters' printers. For example, one piece, showing the Coat of Arms of the City of Melbourne has mistaken the image of a spouting whale for a fox, hardly a symbol of this country!

Plating Up History is not only for those interested in Australian history, or Australian souvenir china but those who want to start an affordable collection, trivia buffs or who just want to have a quirky travel guide when travelling around Australia.