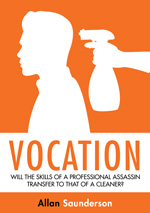 About the project:
This book was edited by Australian eBook Publisher and was then converted to both epub and mobi. Once the conversion was approved by the customer we distributed the ebook to major ebook distribution channels including Amazon and Apple.

About the book:
"The Assassin" aka Steven Smith has had a career change. For the past decade, he’s been Ipswich City's "go to man" within the drug world. If they needed a person taken care of, they called, "The Assassin". But it's time to get on the straight and narrow. Will Steven's unique and violent skill-set, transfer from hit man to the corporate world of banking? It is unlikely as he’s taking a position as a cleaner. Steven struggles to hold his head high as he ducks and weaves through the treacherous terrain of a modern office. Before renaming himself "The Cleaner" he has one last chance to test his unusual skill-set. His new Boss goes missing and it is up to Steven to walk the fine line between office politics and deadly streets to deliver the boss safely and find his own true VOCATION.